Shoot the Kriss Vector at Machine Guns Vegas in the 5 gun package. Where you can pick any of these 5 guns: Kriss Vector, ACR, Sniper Rifle, Pistol Grip Shotgun, Colt Commando, M2, RPK, Uzi, P30 or S&W 500. 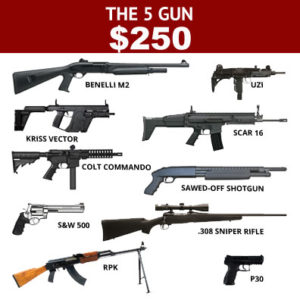 The KRISS Vector is a submachine gun with semi-automatic firing. It uses the KRISS Super V system for its blowback, the first of its kind that transmits recoil downward and upward instead of straight back. This makes it a great addition to Machine Guns Vegas’ Las Vegas gun range. Here at MGV, we keep a diverse collection of well-maintained handguns, semi-automatic guns, and assault rifles for customers of all experience levels.

At about two feet long and weighing about 5.6 pounds, the KRISS Super V has a unique shape and size that makes it unlike any other gun. Our experienced team of Gun Girls is always on hand to make sure that your time with us goes off without a hitch. They’ll introduce you to your firearms, show you around the facility, and assist while you’re on the range.

If you want to shoot the KRISS Vector, it is available in many of our Las Vegas gun range packages. We’re located close to the main strip and can arrange to get you to and from where you’re staying. The KRISS Super V is just one of the thrilling guns we have available at the MGV gun range, so come and check us out, no matter what kind of weekend you have planned.

Have you ever wanted to shoot something unique, or maybe something eye-catching? You may want to try shooting the Kriss Vector. The Vector looks and feels like something futuristic, and is in fact one of the most popular submachine guns out on the market today. This sleek design and feel will be one of your favorite things about this gun, and will surely up your shooting game.

In 2007, the company TDI announced it would begin developing a new submachine gun. At the time not much was known about the project, except that it went under the name Kriss. The name Kriss comes from a Southeast Asian dagger that has a flame-shaped blade. A prototype was announced in 2011 at the SHOT Show in Las Vegas, and highlighted many design features like easy caliber interchangeability and using a single takedown pin. Kriss then announced a Gen2 version of the original vector models in 2015, and these feature a new pistol grip, trigger, safety selections, and better compatibility. The Kriss Vector is split into two major parts, very similar to the AR15 rifle, and is secured together with four pins. It features an ambidextrous safety control, and available in calibers such as .40 S&W and 9x19mm Parabellum. The newer 9mm versions are able to use the standard Glock 17 magazines.

The Kriss Vector is currently being used by many police and military forces around the world. It can also be spotted among many popular films, such as The Purge, Taken 3, and Maze Runner: The Scorch Trials. Eagle-eyed watchers may even spot it in the tailors’ arsenal in the movie John Wick. It can also be spotted in games like Far Cry, Pay Day, Rainbow Six, and Call of Duty. Its unique design and recoil absorbing mechanisms have taken this gun to become very popular in a very short amount of time. This system moves the bolt backward and an inertia block behind the magazine to direct energy down instead of backward. This greatly reduces felt recoil, as well as the muzzle climb during rapid fire. The entire system also keeps a low axis of center with the barrel more in line with a shooter’s hand and shoulder, also helping to reduce recoil. All of these features combined helps shooters recover faster and get off more accurate shots even quicker. Most Kriss Vectors are capable of shooting over 1200 rounds a minute.

The Kriss Vector is a very unique and sleek weapon, sure to catch the eyes of anyone on the shooting range when it comes out. It is one of the smoothest shooting submachine guns in the world, and extremely comfortable to shoot. Machine Guns Vegas is here to help you shoot this amazing gun, and have everything you need here at our ranges to get you set up! If you have ever thought about shooting a Kriss Vector, you will love shooting this automatic machine gun here with us at our facility.