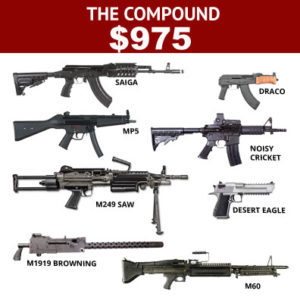 Firing the fully automatic Browning M1919 lets Machine Guns Vegas’ guests get a taste of history. It’s been used in multiple wars, including WWII, the Korean War, and the Vietnam War. We’ve re-chambered our M1919 Browning guns to the new 7.62×51mm NATO round, which reflects the most modern uses of the firearm.

Movie buffs will find using the M1919 at the best shooting range in Las Vegas to be extra exciting. It’s been seen in Captain America: the First Avenger, the Expendables, Death Race, and many other films. This makes it a great automatic machine gun for bringing another element to the different gun range packages we offer.

Don’t let the M1919’s size dissuade you. Our MGV Gun Girls help make the process simple. No experience firing guns is necessary, and the Browning M1919 is especially easy to handle for something so powerful due to the fact that it’s mounted. We can even help arrange transportation to and from your hotel to make the experience smoother.

Plus, the Machine Guns Vegas Gun Girls and staff are incredibly knowledgeable about the Browning M1919 and our other options. This fully automatic gun is a belt fed machine gun and was originally designed with .30 caliber bullets. You may recognize it from seeing it mounted on jeeps or aircraft. It’s incredibly powerful and a true thrill to handle. Come try it for yourself at our Las Vegas gun range.

The M1919 Browning machine gun is a.30 caliber medium machine gun that was used mostly in the 20th century. It saw most of its action during World War II, the Korean War, and the Vietnam War. It was primarily a light infantry, mounted, aircraft and antiaircraft machine gun that was used by the United States and many other countries as well. Many of these guns were later rechambered for the 7.62x51mm NATO round and still continue to be in service today. It is an air-cooled gun designed after many World War I designs by John M. Browning, who it got its
name from. Since its primary role as a support weapon, the M1919 required at least a two man
team to run effectively. Many times up to four men would run a single gun: the gunner, the
assistant gunner, and two ammunition carriers.

Some modifications were later introduced in order to help the weapon be lighter and more easily transported, including a light barrel and bipod. The M1919 played an important role
in WWII for its firepower against other units and gave a weapons platoon additional automatic
fire support in assault and defense situations.

The Browning M1919 remains very popular until this day, both with armed forces and civilian shooters in the United States. Because of this, many M1919 can be seen shooting today, especially in semi-automatic forms. But what fun is that? Here at Machine Guns Vegas, fully automatic M1919s are what we specialize in. The Browning M1919 is a very popular weapon and has seen its fair share of the spotlight. You can find this weapon in recent movies such as Hacksaw Ridge, The Siege of Jadotville, Fury, Death Race, and The Expendables. It can be seen in television shows such as Band of Brothers, Chuck, and CSI. Many video games include this weapon in their arsenals, including Call of Duty, Battlefield, Bioshock, and Uncharted. With a weapon so popular and powerful, it is no surprise to see this machine gun in these popular sources in the media.

If you have ever wanted to experience what it is like to shoot a classic wartime machine gun, you have found the right one. This machine gun is very powerful and is an absolute pleasure to shoot. Machine Guns Vegas specializes in weapons just like these and has everything you will need to make your dream come true and fire this weapon. This is one weapon that you do not want to miss out on!