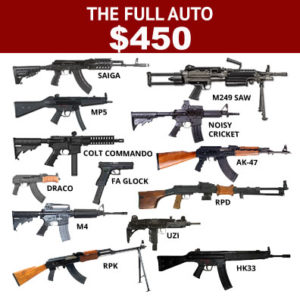 Heckler and Koch is known for making some fantastic firearms, and in 1968 they introduced the HK33 assault rifle to the world. Chambered in 5.56x45mm, it was intended to compete with Colt’s AR15/M16 and similar variants. It uses the same roller delayed blowback operating system that the company developed for the G3 battle rifle in the 1950s. Using a very modular design, a person could replace the stock of the rifle with a collapsible stock for easier convenience. H&K also developed a carbine version of the same gun, with attention to detail on rifle weight and length. Although it was much heavier than a traditional M16, the HK33 saw some use by Navy SEAL teams due to its ability to use a 40 round magazine.

The HK33 is still in service with a number of countries around the world, and is used by countries such as France, Greece, Ireland, and the United Kingdom in special units. It is widely exported and used in Asia and South America and used in extensive service there as well. Although based on the famous G3 design by Heckler and Koch, it did not gain quite the same popularity as the G3 even though the design was based off of it.

Although a lesser known and recognizable rifle, the HK33 is still found in the mainstream media around the world. Featured in movies like Four Brothers and Scarface, it never did find much popularity among movies or television despite being an excellent, quality gun. It fires very smoothly, and the 5.56x45mm round does not cause hardly any felt recoil when shooting this gun. When fired, the two rollers in the bolt are moved inward by the barrel extension and use a rearward motion on a locking piece, greatly reducing the recoil on this rifle.

It has an ambidextrous trigger group with a selector switch that can be used to put the gun on safe, or select the amount of fire. It is usually fed with 20, 25, or 30 round magazines as well 40 round steel magazines. It is aimed with adjustable iron sights that are adjustable for windage and elevation like most standard rifles. Its modular design also allows scopes and optics to be used, greatly increasing its effective accuracy and range.

With a rate of fire of over 700 rounds per minute, shooting an HK33 assault rifle is the experience of a lifetime. Thanks to its controlled recoil and operating system, the full auto is manageable even for the 5.56x45mm round and its felt recoil. If you want to experience what it is like to control this kind of fire power, the Heckler and Koch HK33 should be high on your list of firearms that you need to shoot before you die. Anyone that has shot one can confirm, you will be very happy that you did! At Machine Guns Vegas we have everything you need to shoot this amazing gun and enjoy the adrenaline rush that comes with it.